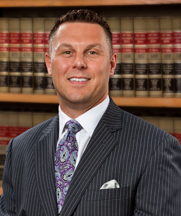 Jamie Greenwald began his legal career by interning at Gary Greenwald and Partners during his studies in law school. After his graduation in 2003, he passed the July 2003 New York State Bar Examination and began working as an associate.  He currently is admitted to the New York State Bar Association and was also admitted in March 2004 to the United States District Court – Northern District of New York.  Additionally, he became admitted to the Bar of the Commonwealth of Massachusetts in 2012.

His areas of practice are personal injury, real estate, criminal law and most areas of general law.  Mr. Greenwald is known for his dedication to his clients and constant communication with them as their case evolves.  His diligence and perseverance to reach a positive outcome on every level has proved invaluable to all his clients.  Each client has unlimited access to him on his personal cell phone and he always makes himself available for consultation.